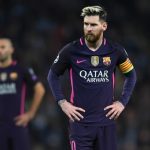 Report have emerged claiming that Manchester United and adidas are working on a sensational move for Barcelona superstar Lionel Messi.

Marketing Deportivo says Jose Mourinho and United want the Argentine star as his contract – which runs to 2018 – remains in doubt.

United and adidas are trying to convince him to sign for the English club with the German company willing to pay United 100 million euros annually.

“Messi’s contract renewal has not commenced, they’re not even negotiating and there’s not even a firm offer on the table”, it is claimed.

The problem is the 250 million euro release clause. One way around this problem is to pay the Argentine a bonus of 100 million euros — in addition to 50 million euros bonus per year — for him to run down his existing deal. Adidas would help United pull off the operation, virtually entering a partnership to ferry the global star away from Nike-sponsored Barca.