It has been reported that Manchester United are eyeing Lazio midfielder Lucas Biglia. 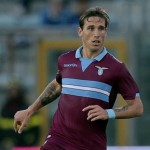 The 29 year-old Argentine has long been linked with United since his days with Anderlecht.

The Mirror says Biglia is vastly experienced and United were interested in January but his club refused to consider letting him go.

Paris Saint-Germain have also been linked with the 29-year-old who would cost around £8m this summer.