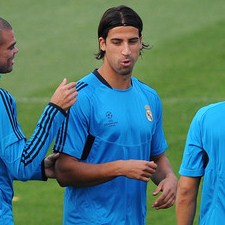 Sensational news are out and it has been revealed that Manchester United boss Sir Alex Ferguson is eyeing Real Madrid midfielder Sami Khedira.

According to Kicker, Ferguson feels his midfield is missing defensive steel and has Khedira under consideration.

The Germany international has been in and out of Real’s first team this season and has struggled for regular football since last summer’s arrival.