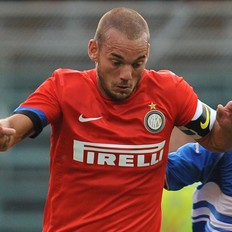 It has been reported that Manchester United are getting serious in their bid to sign Inter Milan midfielder Wesley Sneijder.

The Dutch international star is ready to quit Inter in January after refusing to accept a pay-cut.

Sneijder has been warned he will not play for the club again if he continues his stand.

ESPN says United are now seriously considering a move for Sneijder and actively discussing the option. Nani could move in the opposite direction.