It has been reported that Manchester United have been hit hard by injury during international week. 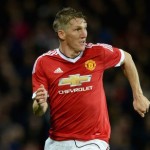 Bastian Schweinsteiger, Wayne Rooney and Michael Carrick have all picked problems on international duty and are doubts for United’s trip to Everton.

Schweinsteiger picked up a thigh injury in the warm-up ahead of Germany’s clash with the Republic of Ireland last night, and coach Joachim Low is unsure over the severity of the problem.

Carrick is touch-and-go for England’s clash with Estonia tonight, but skipper Wayne Rooney is out.