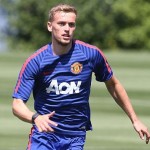 Reports are out claiming that Manchester United are inviting loan offers for James Wilson.

The Manchester Evening News reported that United will allow Wilson to leave on loan before the transfer deadline.

It is understood more than 10 Premier League clubs have expressed an interest in the England Under-21 international.

United are expected to announce the signing of Monaco’s 19-year-old forward Anthony Martial on Tuesday. But the club are not expecting any more major additions before the 6pm deadline.