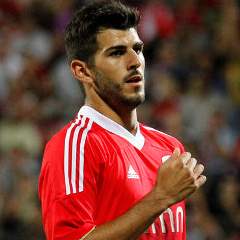 Reports are out claiming that Manchester United have joined the race for Benfica striker Nelson Oliveira.

The 21 year-old centre-forward is starring on-loan for Deportivo La Coruna, where he has attracted enquiries from Manchester City and Chelsea.

According to El Mundo Deportivo, the Premier League giants have now joined the battle for Oliveira, who has scored two goals in the first four games of the season for Depor.