Reports are out claiming that Manchester United are showing significant interest in Roberto Firmino. 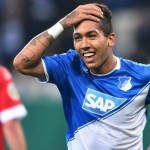 The Daily Mail and Bild are both reporting that the Red Devils are keen on the Hoffenheim attacking midfielder and could go after his services in the summer.

Bild is of the belief that United sent scouts to cast an eye over Firmino, 23, in last weekend’s meeting with Hamburg and have courted his representatives over a potential move in the next transfer window.

The Daily Mail suggested that Louis van Gaal’s side are prepared to pay a £14.5million release clause for the Brazilian who can also be deployed as a winger or second striker.