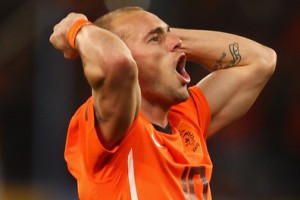 However it is said that Italian and European champions Inter Milan are determined to keep hold of Sneijder at the San Siro.

The player’s agent, Soren Lerby, revealed that talks with Inter are scheduled after the World Cup to extend the midfielder’s contract — now worth £3.5m a year after tax — until 2015.

But United have made the first move in their attempt to lure him to Old Trafford.