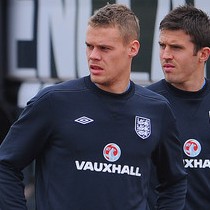 The Telegraph revealed that United sold Shawcross to Stoke for an initial £1 million in 2008 but still have a buy-back option which allows them first refusal if any rival clubs make a bid.

Sir Alex Ferguson has made no secret of the fact that he regretted selling the former Old Trafford trainee and could move to bring him back in the summer, with doubts over the long-term fitness of Rio Ferdinand and Nemanja Vidic.

Shawcross joined United as a 15 year-old and made only two appearances in the League Cup but Ferguson is known to have been keeping a close eye on his progress. In his programme notes before United’s game against Stoke last month, he wrote: “I was delighted to see him called up for the England squad because he is a quality player I have wished – particularly of late – was still at Old Trafford.

“The problem was that at the time of his release we had an especially strong group of young centre-halves and it was becoming impossible to give them all games at the level their progress warranted. We had Jonny Evans, Gerard Piqué, Ryan Shawcross, Craig Cathcart, and Paul McShane, and something had to give. We made the right decision keeping Jonny Evans but I’m not so sure about letting Shawcross join Stoke.”