It has been reported that Manchester United legend Paul Scholes has ruled out a return to professional football. 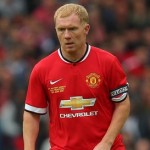 Scholes was speaking at the launch of ‘A Class of 92: Out Of Their League’, a television documentary about Salford City, a club owned by United’s famous Class of 92.

The former England international mentioned an incident when co-owner Gary Neville tried to convince him to come him out of retirement to play for Salford in an FA Cup tie.

Old Trafford legend Scholes revealed: “I thought about it (playing again) for a minute if Gary said he was playing too. But if you look at me and Gary now, I think you’ll see it’s too late now.

“Coaching is something I would be interested in getting into. I coach my son’s team on a Thursday and it’s nice when you see the kids’ eyes light up seeing you there.

“I did a session or two last season at Salford because we were asked by the manager but they don’t need me to do that now and it’s not the job of the owners to go down and do coaching unless you are asked. I’ve had the one offer in management at Oldham, maybe in the future it might be something.”