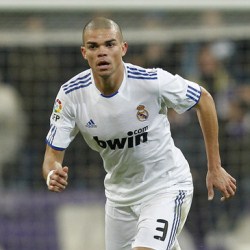 Premier League power-house Manchester United are being linked with a move for Real Madrid defender Pepe.

Reports have surfaced that United boss Sir Alex Ferguson is interested in the Portuguese interntional as he seeks experienced cover for Nemanja Vidic and Rio Ferdinand, who has suffered a number of injuries in the past couple of seasons.

The former Porto defender’s current contract runs out in 2012, and Madrid want him to commit to the club until 2015.

However Real Madrid are only offering him €3.5million a year, while Pepe is demanding €5million, apparently putting him on a par with French ace Karim Benzema.

Jose Mourinho Pleased With The Signing Of Modric, Essien