It has been reported that Bolton Wanderers striker Zach Clough is being watched by Manchester United. 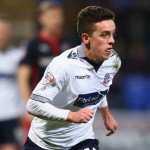 The Red Devils recently opened a dossier file on the Manchester-born starlet.

Clough, 20 emerged during the latter half of the last campaign, scoring six times in just eight appearances for the Trotters, before a dislocated shoulder ended his season.

The cash-strapped Championship club are aware of United now hovering in the background, although he is currently contracted until summer 2017.