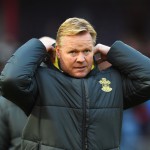 Reports are out claiming that Southampton boss Ronald Koeman says today’s opponents Manchester United must be challenging for titles.

“They have great players so it’s normal that they will fight for titles,” Koeman said.

“They have to. How you can spend that money, how can you sign that kind of players, and not be fighting to win titles?

“We had some problems in the past. We shake hands and I hope he will do well with United. It would be special to beat him, but I lost the last time and we try to put it right this time.”