It has been reported that Louis van Gaal said he was only interested in winning the Premier League in his first season as manager with Manchester United. 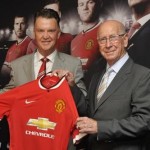 Asked if a Champions League finish was the minimum required in his first campaign, Van Gaal said: “For me, the challenge is always to come first. Not fourth. But that depends on things clicking between the players and manager. I have a strong philosophy. Sir Alex Ferguson did too, and he won a lot of titles. I hope I can do that.

“First of all I have to see how the players perform my philosophy and how quickly they pick it up. I haven’t worked with most of them so we have to wait and see – it’s very important that there is a click between the players and the manager. For me the challenge is first and not fourth, but when you analyse it it’s about the click.”

Asked if he could fulfil expectations at Old Trafford, the 62-year-old said: “I think I can. But it is difficult because the greatness of this club is more than other clubs. And this club is guided in a commercial way and it is not always possible to meet commercial and football expectations. That is my big challenge after two days.”

When asked about not taking a holiday following the World Cup, Van Gaal said he could not think about having a vacation with such a huge challenge hanging over him.

“I could not let them go. When you are asked by the biggest club in the world, it’s a big chance for me,” he said. “When there is a challenge like this, I never let it go.”


Arsenal Go Back On Merchandise Code With Three Kits Per Year