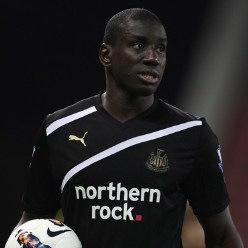 Reports have emerged that Manchester United are set to make a shock move for Newcastle United striker Demba Ba.

The Telegraph has reported that United and Tottenham lead the chase to sign Ba.

It is said that United manager Sir Alex Ferguson was impressed by the Newcastle attacker’s display in the Reds’ 3-0 defeat at the Sports Direct Arena.

It is also said that both clubs are aware of a reported clause in his contract which could see him available for a cut-price fee.