It has been revealed that Manchester United are willing to sell Rafael da Silva this summer. 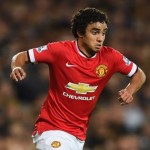 According to Sky Sports, the Red Devils are prepared to listen to offers for the Brazilian.

The 24-year old right-back has been at Old Trafford since 2008 but appeared just 11 times under Louis van Gaal last season.

It is believed that Rafael is attracting interest from Serie A duo Napoli and Fiorentina while Turkish giants Galatasaray are also keen.