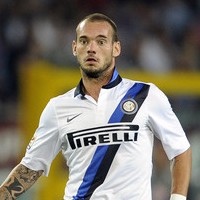 The Dutch international playmaker has been warned by Inter management that he won’t play again for the club unless he accepts a pay-cut.

The Daily Express says Sneijder, who is feted as one of the world’s best midfielders, was heavily linked with a move to Manchester United in 2011, but pledged his future to Inter.

However, Sir Alex Ferguson could be tempted to try again as Sneijder’s future at Inter doesn’t look like being resolved anytime soon.

Coupled with that, United have looked flat in the middle of the park in recent games, and Sneijder could provide an extra dimension to their play.