It has been reported that Manchester United are willing to go to £60 million to sign Bayern Munich striker Thomas Muller. 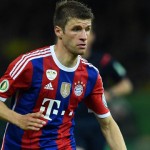 The Daily Star claims that United will go for the German once a deal is done with Fenerbahce over the sale of Robin van Persie.

It is understood United are now poised to make a move for German ace Muller in the hope of luring the World Cup star to Old Trafford.

Bayern Munich will be reluctant to sell Muller, but United chief executive Ed Woodward remains confident of landing him in a £60m deal.

Van Gaal has just Wayne Rooney and teenage rookie James Wilson at his disposal and knows he needs to sign at least one proven forward to help United challenge for trophies next season.