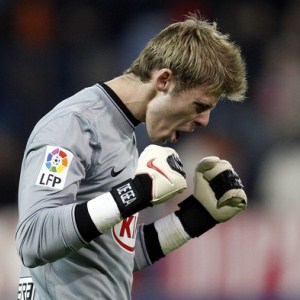 Transfer news are out and it has been reported that Premier League powerhouse Manchester United have made a firm move for Atletico Madrid goalkeeper David De Gea.

It has been revealed that Manchester United have already opened talks with Spanish club Atletico Madrid over an £18m move for 19 year old De Gea.

It has been widely reported that Sir Alex Ferguson are on the look out for a new goalkeeper with Edwin van der Sar’s, 40, career drawing to a close.

Sir Alex Ferguson has identified De Gea as the man to succeed the Dutchman.