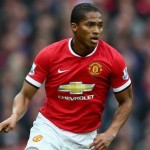 It has been reported that Manchester United are preparing to sell Antonio Valencia in the summer transfer window.

According to Tuttomercatoweb, the Red Devils are looking to offload the 29-year old Ecuador international in order to fund the purchase of a genuine right-back.

Valencia has been used on the right side of the defence by Louis van Gaal this season but it is believed that the Dutchman is eager to lure a quality right-back to Old Trafford.

The likes of Southampton’s Nathaniel Clyne, Paris Saint-Germain’s Gregory van der Wiel and Barcelona’s Dani Alves have all been linked with United in recent weeks.

Valencia, who has been with the Red Devils since 2009, is reportedly available for just £7million.