It has been reported that Manchester United have announced their released players. 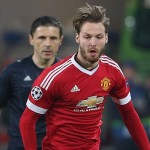 Nick Powell and Victor Valdes are the two first-team players who have been released by Manchester United this summer.

Powell made two substitute appearances under Louis van Gaal last season, coming off the bench against Wolfsburg and Bournemouth in December, before joining Hull City on loan. The 22-year-old signed for United from Crewe Alexandra in 2012 and scored on his debut against Wigan Athletic.

Valdes arrived as a free agent last January and made his bow when replacing injured no.1 David De Gea during the 1-1 draw with Arsenal in May 2015. He kept his place for the goalless draw at Hull in the final game of the season. The 34-year-old had a spell on loan at Standard Liege last term, helping the team win the Belgian Cup.

Another goalkeeper, George Dorrington, and attacking midfielder Oliver Rathbone, have also been released. Dorrington played 10 times for the youth team in 2015/16 while Rathbone made one appearance for the Reserves, during the Lancashire Senior Cup win at Blackpool.