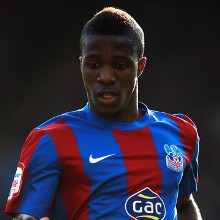 Reports are out claiming that Manchester United is ready to rival Arsenal for Crystal Palace youngster Wilfried Zaha.

According to the Daily Mail, Manchester United have joined the list of clubs scouting the England U21 international.

Tottenham are understood to be in pole position but Arsenal, Manchester City and Liverpool are also watching him.

Zaha has made a total of 108 appearance for Palace scoring 14 goals along the way. Man Utd, Valencia To Do Battle For Lazio’s Lucas Biglia