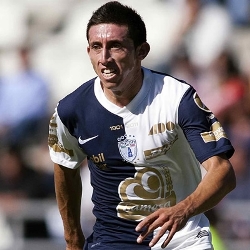 Reports are out claiming that Manchester United are planning a bid for Pachuca winger Hector Herrera.

The 22-year-old midfielder was the inspiration behind Mexico’s gold medal victory and has been on United’s radar for over a year with Liverpool also very keen.

Herrera is recovering from an ankle injury but United see him as a decent replacement for former transfer target Lucas Moura who moved to Paris St Germain.