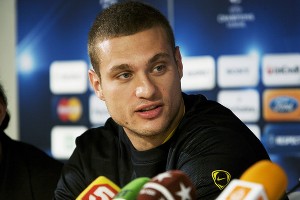 Interesting transfer news are out and it has been reported that central defender Nemanja Vidic is set to be sold by Manchester United.

It has been reported that the confirmed deal for Fulham defender Chris Smalling will see United sell Serbia international Vidic.

Spanish giants Barcelona and Italian power-house AC Milan have expressed their interest in Vidic, but Real Madrid appear his most likely destination, with United expected to hold out for up to £30 million.