Manchester United have released their 26-man squad for the Champions League group stage. 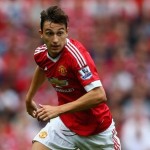 Louis van Gaal has pulled together his list for the initial phase of Europe’s premier club competition and has included David De Gea despite his failed deadline day move to Real Madrid.

Veteran goalkeeper Victor Valdes missed out while largely unused youngsters Nick Powell and Guillermo Varela have made the cut.

United take on PSV Eindhoven, CSKA Moscow and Wolfsburg in Group B with their first fixture in Holland against Depay’s former club PSV on September 15.

*All clubs are required to submit a 25-man squad but can add ‘List B’ players as extras pertaining to age requirements. Clubs can register an unlimited amount of ‘List B’ players.