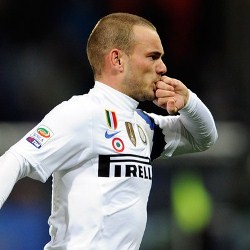 Sensational news are out and it has been revealed that Manchester United have struck personal terms with Inter Milan star Wesley Sneijder.

The Daily Mail has reported the Premier League giants hope to complete the £35million transfer of Sneijder after agreeing terms of around £190,000 a week with the Inter Milan midfielder.

The Dutch international star was forced to compromise on his initial wage demands of £250,000-a-week, but an agreement has been struck and a deal is close to completion.

The Glazer family, who own United, have sanctioned the fee for the 27-year-old former Real Madrid ace as a replacement for Paul Scholes, who retired at the end of last season.