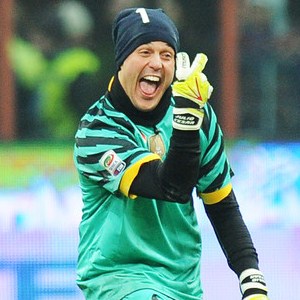 It has been revealed that Inter Milan goalkeeper Julio Cesar is emerging as a top target for Premier League giants Manchester United.

Even though the Brazilian international was not mentioned by United boss Sir Alex Ferguson’s coaching staff over the weekend, Julio Cesar is on his radar.

On their part, Inter Milan are reportedly preparing to sell the keeper, who for some is the best in the world, by lining up Bologna’s Emiliano Viviano as his long-term replacement.

Ferguson is in the market for a new No1 after Edwin van der Sar announced his retirement last week and is having Julio Cesar watched by keeper coach Eric Steele.

A move to United is something he would consider, admitted Julio Cesar in December. I Do Feel We Are Improving – Man Utd’s Morgan Schneiderlin