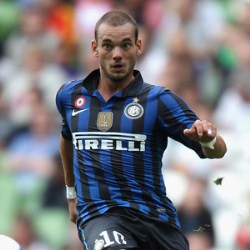 It has been revealed that Inter Milan midfielder Wesley Sneijder is in Beijing with an offer on the table from Manchester United.

The Mirror has reported that the Dutch international midfielder will be given the next week to consider his future.

The former Real Madrid star is in Beijing with his club Inter as they prepare for the Italian Super Cup, which is a showpiece showdown with old rivals AC Milan in the far east.

Inter have held informal talks with United over a fee, and while they haven’t yet finalised terms, they have indicated they are prepared to allow the midfielder to leave.

That has given the chance for United boss Sir Alex Ferguson to make his approach to the Dutchman, and talks will continue with the player’s representatives during the week.

The World Cup finalist has what amounts to a tax free deal with Italian side Inter, and that has presented Ferguson with a difficult hurdle to overcome as his club attempts to put together the figures to attract Sneijder.

But sources within Old Trafford insist they remain confident a deal can be put together that will offer incentives for the talented playmaker to move to England.