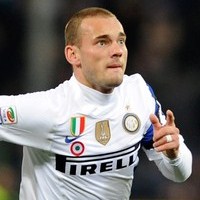 The Premier League champions have been tracking the Dutch international for much of the summer – and it now seems that the two clubs are ready to sit down and discuss a deal.

Internazionale apparently value the attacking midfielder, who is also wanted by Malaga, at a massive €39m.

It’s claimed in Italy that Inter would want such a fee in order to then re-invest it by rejoining the race to sign Alexis Sanchez from Udinese. Cristiano Ronaldo To Turn Down Man Utd For PSG Move