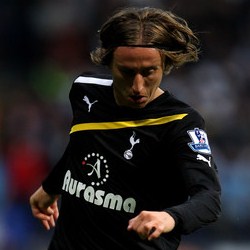 It has been reported that Sir Alex Ferguson is interested in signing Tottenham midfielder Luka Modric.

The Mirror says after clinching a deal for Borussia Dortmund ace Shinji Kagawa, Modric is still in his sights as he seeks to hit back after Manchester City’s dramatic last-gasp league success.

United face competition from across Europe for Modric, who is now being linked with a £25 million move to PSG.

Ferguson won’t go higher than £30 million for the Croatian.