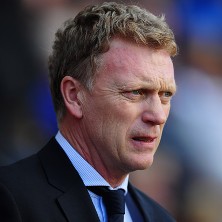 Ashley Young returns to the Manchester United squad after a five-match absence. Young has been sidelined by a knee injury but bolsters the Red Devils’ wide options ahead of the Champions League showdown with Real Madrid. Phil Jones (shingles) and Michael Carrick (hip) have both recovered from the problems which prevented them reporting for international duty this week.

Marouane Fellaini (hip) should be fit, but defender Seamus Coleman faces another fortnight out with a thigh injury.

Sir Alex Ferguson on the challenge of implementing financial fair play rules: “It’s all good in theory but the application of it will always be difficult. If people have money to burn they can place it anywhere in the world. I’ll be interested to see how they think they can operate it. It would be good if it was applicable, but I have my doubts. I think it’s always going to be problem to try to enforce it.”

David Moyes: “I don’t know if you can look at our recent results against them because over the years Manchester United have taken an awful lot of points off us. Obviously the game this year we had a good victory and we had a hard draw there last year, but if you look over time they have taken far more points off us than we have off them. It’s a real tough game for us. I don’t think anybody would think it is anything less than that.”

Manchester United have recovered more points from losing positions than any other team in the top flight this season (27).

Manchester United have scored the most headed goals in the top flight this season (13) while Everton have conceded the most (12).

The Toffees have scored the highest proportion of first half goals of any team in the top division this season (58%).

Everton have also been susceptible to conceding early with a league-high 30% of goals conceded being shipped in the opening 15 minutes.