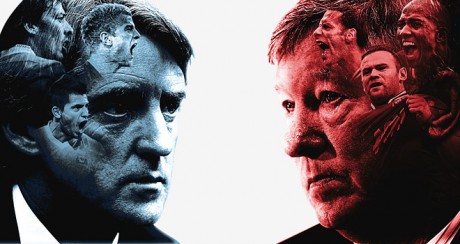 Wayne Rooney is set to return for Manchester United. Rooney returned from international duty with a groin strain that has kept him out of games against Sunderland and Chelsea but after returning to training on Thursday, should be involved against Roberto Mancini’s men. Rafael (groin) is also fit, while Nemanja Vidic (back) and Jonny Evans (hamstring) are 50-50.

Right-backs Micah Richards and Maicon (both knee) are the only Manchester City players definitely ruled out of the trip to Old Trafford. The pair could return in the coming weeks while midfielder Jack Rodwell (hamstring) could be close to making his comeback. Playmakers David Silva and Samir Nasri are both fully fit after suffering minor knocks in last week’s defeat of Newcastle and defender Matija Nastasic (foot) returns.

Sir Alex Ferguson: “It’ll be a big game for City – they’ll want to come and derail us for a spell. I can understand their motivation – we’d probably have the same thing. There will still be a great intensity about the game. It’s the only game and it will be shown all over the world. That does seep into the fabric of what the game will be like for both teams. You can’t dismiss that.”

Roberto Mancini: “We don’t deserve to stay 15 points behind. They have played very well, they have won a lot of games. The last 18 (unbeaten) – the last time they lost was Norwich. They deserve to stay on the top, but not 15 points. It is not a true table. Now we have eight games. If we play well, if we win a lot of these games, maybe we can reduce this gap. This should be our target in this moment.”

Manchester United (W25 D2) and Manchester City (W18 D2) are two of the three teams yet to lose in the Barclays Premier League this season when they have taken the lead (Arsenal are the other).

Sir Alex Ferguson’s side have won each of their last seven Premier League games and are unbeaten in 18 (D2). Both are Premier League bests for this season.

Including the Community Shield match in 2011, the last five meetings between Manchester City and Manchester United (all comps) have seen 23 goals scored – an average of 4.6 a game.

Manchester United are the only team yet to concede a penalty in the Premier League this season.
Only Man City (14) have kept more clean sheets than United so far this season (11).

35% of the goals Man City have conceded in the league this season have been scored from outside the area (9 of 26); a league high proportion.

Robin van Persie has gone nine successive appearances without a goal in all competitions; this despite attempting 24 shots a goal within his 549 minutes on this pitch during this run.

Carlos Tevez has now netted seven goals in his last six competitive games for Manchester City.
Manchester United have won eight and lost just one of the nine Premier League games without Wayne Rooney this season.

On six occasions this season, Man Utd have conceded the first goal at Old Trafford in the Premier League. They have won five of those six games, losing the other 3-2 to Tottenham.

Joe Hart Only Wants To Play For Manchester City