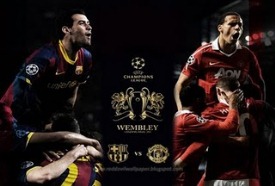 We are hours away from the Champions League final between Barcelona and Manchester United at Wembley Stadium.

This will be the 11th meeting between Barcelona and Manchester Utd, in all competitions. The record is perfectly balanced with three wins each and four draws.

Their last meeting dates back to the 2009 Champions League final with Barcelona winning 2-0 at Rome’s Stadio Olimpico.

Their 10 previous meetings have seen a grand total of 31 goals, an average of 3.1 per game.

Chicharito or ‘Little Pea’ has had a stellar season in his first season with Manchester United and the Mexican international would be looking forward to end with a bang. Aand what a great ending it would be if Hernandez could score against the might Barcelona who are the clear favourites to win the Champions League this year. Hernandez has shown what he is capable of and Barcelona might suffer the first hand experience of the terror that is Javier Hernandez.

Prediction Time : Who Will Win The 2010/11 Champions League Final?

Manchester United must have learned a valuable experience since their last meeting in 2009 and will be cautious in their approach in the game. Barcelona on the other hand will be desperate to add more trophies to their trophy cabinet and will be determined to deliver the Champions League trophy to their manager who is set to quit the club after the finals.

However there could only be one winner in this match and TFM predicts that this will be a close match and Manchester United will emerge as the Champions of Europe by beating Barcelona 2-1.

So who do you think will win the match? Vote now and let us know what you think. You can also predict the score in the comments section below. Cheers!

Don’t Forget You Can Watch The Match LIVE Only On TFM!