Reports are out claiming that Manchester United have sent a scout to watch Austria for the third successive home match. 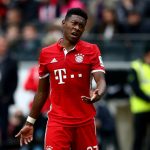 The Sun is reporting that United scout Thomas Bormann is on the list for Tuesday’s friendly with Slovakia in Vienna.

While it is not clear exactly who Bormann is watching, it is being reported that Bayern Munich’s David Alaba and Bayer Leverkusen’s Aleksandar Dragovic are high on the list.

Jose Mourinho is believed to be after new defenders in January and left-back Alaba has previously been linked with a potential move to Old Trafford, which makes his name one that stands out.

Also being linked with the Red Devils is highly-rated centre-back Dragovic, who only joined Leverkusen from Dynamo Kyiv in August, but could be lured to the Theatre of Dreams if Mourinho comes calling.

Austrian scout Bormann also attended the weekend’s World Cup qualifier with the Republic of Ireland as well as last month’s 2-2 draw with Wales at the Ernst-Happel-Stadion.