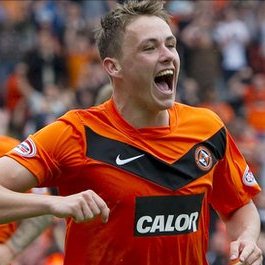 Skysports.com revealed that the Premier League champions are one of the clubs keeping tabs on him.

Martin Ferguson attended Dundee United’s clash with Dunfermline last month with the purpose of catching Allan in action, but on the day he did not make it off the bench.

But with Sir Alex dispatching his brother, and most trusted scout north of the border, it is a clear indication that Allan has made a big impact.