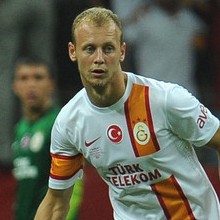 It has been reported that Manchester United are keeping tabs on Galatasaray defender Semih Kaya.

Gala officials confirmed last month that United had asked about the 21 year-old stopper.

Tekin Birinci told Calciomercato.com: “I read about it too, but I do not think there are negotiations underway. The player has great quality, it is normal to be followed by the big clubs, who have scouts around the world.

“Galatasaray president Unal Aysal has publicly put to rest all the rumors excluding a transfer. At least for the moment.”