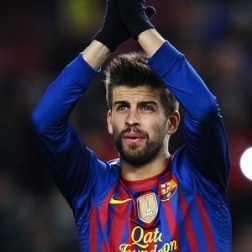 Reports have surfaced that Europe’s biggest clubs – including Manchester United – are monitoring Gerard Pique’s blow-up at Barcelona this week.

The Spanish international defender was dropped by Barca coach Pep Guardiola for victory at Champions League opponents Bayer Leverkusen, with both the Catalan and Madrid press agreeing it was for “technical reasons”.

“The former United defender was blamed for defeat at Osasuna and it emerged yesterday that his advisers have been urged by Barca to speak with Pique about his behaviour. ”

United boss Sir Alex Ferguson admits he never wanted to lose Pique and remains a big fan of the centre-half. With concerns over the fitness of Rio Ferdinand and Nemanja Vidic, a new centre-half is on the agenda this summer for Ferguson and the prospect of bringing back Pique will be explored.

The defender also keeps in touch with several of his former United teammates, including Wayne Rooney, who would love to see Pique back at Old Trafford. Barcelona Starlet Adam Traore On The Verge Of Joining Liverpool