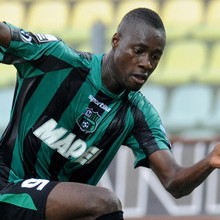 Reports are out claiming that Manchester United are keeping tabs on Sassuolo striker Richmond Boakye.

Boakye is owned by Juventus, but currently impressing in Serie B on-loan at Sassuolo.

The 19 year-old centre-forward is a huge United fan and loves the idea that scouts are watching him and teammate Domenico Berardi from the Premier League giants.

Corriere Mercantile says the Ghanaian would jump at the chance to move to United.