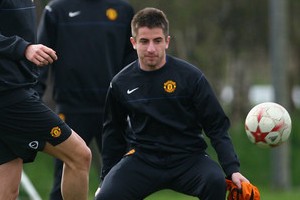 Reports are out that Manchester United winger Zoran Tosic is set for a loan move to Germany.

Local newspapers have reported that Tosic, now age 22, is expected to join Cologne on loan with view to a permanent deal.

It is believed that Cologne switched attentions after being rebuffed on a move for Manchester City midfielder Vladimir Weiss, who has joined Bolton on loan.