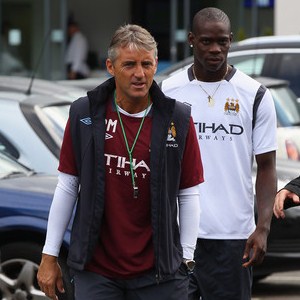 Manchester City boss Roberto Mancini has been forced to admit that new striker Mario Balotelli might require a couple of months before he could settle in at Eastlands.

The controversial striker made the switch to Manchester from Inter Milan over the summer but his City career has yet to really get going due to injury.

The 20-year-old Italian international developed a reputation for having a fiery personality during his time in Italy and has so far collected two yellow cards from just three appearances for his new club.

Mancini has therefore instructed Balotelli to keep his concentration on performing as well as possible, which he accepts could take some time.

Mancini said in the Daily Express that : “It is better that he doesn’t talk, just play. He needs to get a focus on the match,”.

“He has been out for a long time and now just needs to play games.

“Maybe he still needs to understand English football, like David Silva when he first arrived.

“It took David two months to adapt and maybe it will take Mario the same. But people will see that he is a fantastic player.”