Reports are out claiming that Arsenal manager Arsene Wenger has instructed his players to use their victory over Bayern Munich as a springboard to a successful season. 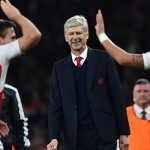 Wenger’s side defeated Bayern 2-0 at the Emirates on Tuesday night having previously lost to the Bavarians several times in the competition.

The result comes as a massive boost for Arsenal who need to win their remaining group matches if they are to have a chance of qualifying for the latter stages of the competition, having lost their opening two matches.

Speaking to reporters after the match, Wenger urged his players to use the result as a confidence builder going forward into the rest of the season.

Wenger said: “It can strengthen our belief and strengthen the belief of people of around us, that means out fans, our supporters.

“We won 3-0 against Manchester United, 3-0 against Watford and 2-0 tonight so it is important we have a good balance between defending well and attacking well. As long as we defend well and score goals then the balance is right.”