It has been reported that Manchester City boss Manuel Pellegrini does not believe the outcome of his side’s match with Liverpool will necessarily decide the destination of the Premier League title. 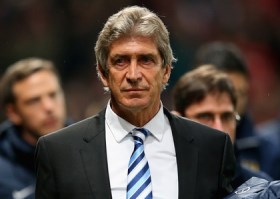 The Chilean said : “It’s a very big game, but I do not think it will choose the title. Every game is a big game now until the end of the season,”.

“Liverpool have had a great season, so this is an important game. It’s a very big game, it’s the team who are at the top of the table.

“Of course the team that wins this game has more of a chance to win the title. But if you think this is the finish of the Premier League, I think it is a mistake.”

Pellegrini also confirmed that Sergio Aguero will be fit for the top of the table clash at Anfield.

“Sergio is OK. He worked all week with the squad normally. It’s very important to have him back. He’s a top player,” Pellegrini says.

“It’s very difficult for their defence to stop him and so it’s very important for us. All the squad is OK, except for Matija Nastasic.”