Manuel Pellegrini has admitted that Manchester City aim to challenge for the Champions League title this season. 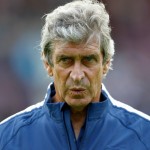 The Chilean admits City want to improve their record in Europe.

“We won the title last season but this year is another year,” he said, quoted by the Daily Mail.

“We have new targets, we will try to make important achievements in the Champions League and to once again win the Premier League.

“So I think that what happened last year is in the past. For our team now it is important to think of the future – and the future is to continue winning titles.”