Manchester City boss Manuel Pellegrini has admitted that he was “delighted” to beat Manchester United 3-0 at Old Trafford and singled out two-goal striker Edin Dzeko for praise. 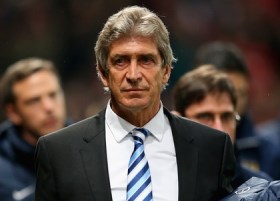 Manchester City, who beat United 4-1 in September, went second in the Premier League with a comfortable victory over their local rivals.

The Chilean tactician was pleased with all aspects of his team’s play as they recorded a third successive league win and clean sheet.

He said: “I am very delighted because I think we played very well, not only in attacking but also in defending. In the last two games we scored eight [goals], but also we improve a lot in defending. It is our fifth [league] clean sheet in a row and at the end of the season it is important not to concede goals. Against a very good team with important players, we didn’t give them any chances to score.”

Dzeko opened the scoring after 44 seconds with the third quickest goal in Manchester derby history and took his tally to 20 goals for the season by volleying in a second after the interval.

But Pellegrini took satisfaction from the Bosnian’s work rate as he returned in front of goal.

He added: “I am very happy for him because he is a player that I think improves a lot this season, not only because he scores goals but because he is working the whole match.

“At the start of the season maybe he was not working so hard without the ball. Today I think Edin is in a very good moment, because he scored and he worked the whole match.” Tevez to “Advice” Balotelli in bid to save his City Career