Manchester City manager Manuel Pellegrini is determined to build on his side’s brilliant form this week. 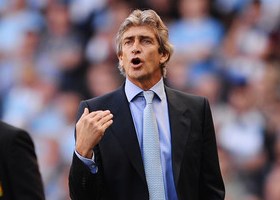 The Eastlands club beat Viktoria Plzen in the Champions League last week, hammered Manchester United 4-1 in the Premier League on Sunday before cruising past Wigan Athletic 5-0 in the Capital One Cup third round on Tuesday night.

The former Malaga boss has been buoyed by the impressive showings of his City side which was this time made possible by a double from Stevan Jovetic plus goals from Edin Dzeko, Yaya Toure and Jesus Navas.

“I spoke with the players before we started the game, telling them we must always try to play the same way,” said the City boss.

“We can change names but for me it was very important to see the same team we saw last Sunday, the same philosophy of football and the same high performance.”