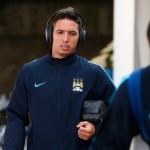 Reports have emerged claiming that Manchester City boss Manuel Pellegrini wants to take Samir Nasri with him to Valencia.

Pellegrini will leave City at the end of the season to make way for Pep Guardiola and he is top of Valencia’s managerial shortlist.

And the Chilean has recommended Nasri as his first signing at the Mestalla.

Lim has welcomed the suggestion and is willing to offer City €20 million to sell the former Arsenal midfielder.