It has been reported that Manchester City boss Manuel Pellegrini hailed an inspirational Joe Hart after victory over Crystal Palace.

The England No.1 played on after suffering a cut close to the eye to make a number of crucial saves as City claimed top spot in the Barclays Premier League with a hard-fought 1-0 win at the Etihad Stadium. 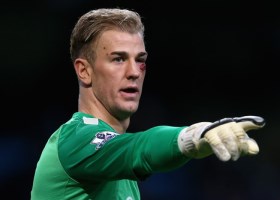 A club official later confirmed that the 26 year old had needed five stitches after being hurt in a collision with Palace striker Cameron Jerome during the first half.

Hart was dropped by Pellegrini at the end of October after a series of high-profile errors for club and country.

He said: “I repeat what I said last week, it was very good for Joe Hart to have a rest.

“He needed a rest and he is playing at his normal performance level, as the good goalkeeper he is.

“He worked very hard but he was always confident he would return to his position.”