It has been reported that Manchester City boss Manuel Pellegrini is looking forward to battling Louis van Gaal at Manchester United. 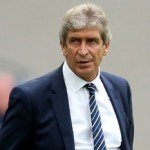 The Chilean believes next season will provide another great chapter in the rivalry between the two Manchester powerhouses.

“I think it depends on how Van Gaal gets United going. We have a great rivalry. We will have to be at our best though.

“Last year they didn’t have that quality but I’m relishing the battles.

“It’s a big challenge and it will be a difficult season. There will be five or six teams vying for the title.”