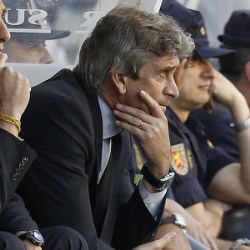 Malaga has awarded a new contract to Manuel Pellegrini.

Malaga, who have brought in a host of new players this summer including Ruud van Nistelrooy, Joaquin Sanchez and Jeremy Toulalan, have also extended the contracts of two members of Pellegrini’s coaching staff, Ruben Cousillas and Jose Cabello, until 2015.